Wireless local area network (LAN) access points have been installed indoors and outdoors. In addition, mobile terminals such as cell phones and personal digital assistant (PDA) devices have wireless LAN capabilities, enabling communications as people move. Leveraging this situation, the communication environments for high-speed mobile terminals are rapidly being expanded, as seen at the Tsukuba Expo.

Network Mobility (NEMO) is a proposed method that uses the Internet from inside a car or train. A mobile router, which is designed for mobility, has a protocol stack as a representative, enabling communications even if nodes within the mobile network do not support mobile IPv6. Furthermore, the hierarchical IPv6 is studied where a mobility anchor point (MAP) is placed between the global Internet and an access point (AP). Although binding updates (BU) concentrating on a MAP generate communication delays and packet losses, a method called MHIPv6, where multiple MAPs are hierarchically positioned, can reduce the loads on a MAP. We are developing a method using mobile terminals controlled by MAPs based on mobile user applications and data size in an environment where many users move at the same speed such as in a Shinkansen train. 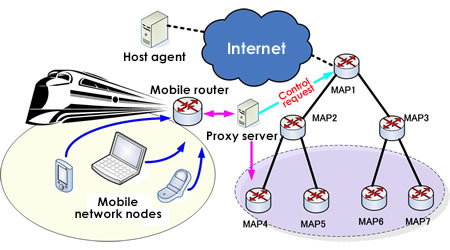 Anycast is a method used when a certain group (e.g., a DNS server) defined by IPv6 is specified to communicate with an optimum device within that group. If a packet is sent to multiple interfaces sharing the same anycast address, the communication always occurs one-to-one on the “closest” terminal in terms of the network. In our method, servers providing the same services can be distributed on the Internet, which yields many advantages such as an improved fault resilience. 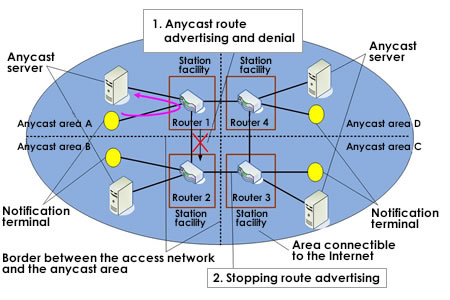 Example of anycast:
Consider a regional emergency notification system, which serves a framework for intelligent transport systems (ITS) using anycast to geographically control routes in an access network. Anycast allows the existing telephone network to send emergency notifications via the Internet to moving terminals such as automobiles. First, this system provides an anycast address for the notifications to the police and fire station terminals. Then the notification terminals directly transmit packets to the closest terminal by addressing a notification to the anycast address. If an area covered by an anycast of the police and fire stations and an area covered by an access network overlap completely, a router that covers an adjacent area must have a setting that does not exchange anycast routing information. Additionally, each service must have a spare as a countermeasure against faults.

Media such as telephone, email, and the Internet can be used almost anywhere due to the high performance and miniaturization of wireless terminals such as cell phones and PDAs. Although outdoor wireless communications normal require a wireless base station, called an access point, communications through this type of infrastructure may not be very effective. For example, the infrastructure does not function in case of disaster or when the communication partner is in a very close proximity.

Ad hoc networks have recently attracted attention for these situations. In an ad hoc network, wireless terminals communicate with each other directly without going through infrastructure such as a base station or dynamically construct a network by multi-hop communications. This is very useful when infrastructure is not functioning or the communication partner is in close proximity.